In the title role, Umculo was pleased to welcome UCT graduate Angela Kerrison, who lives and works in Zurich and has been one of the Salzburg Festival’s Young Singers. Njabulo Madlala, Guildhall graduate and winner of the 2010 Kathleen Ferrier Award, made his South African opera debut in the role of Drunken Poet, and Berlin-based Barcelona graduate July Zuma returned to Cape Town to take the part of Demitrius. Other cast members were: Melissa Gerber, Ronald Paseka, Mlamli Lalapantsi, Brenda Thulo, and Sandile Mabaso.

“The Fairy Queen production really taught us a lot: To sing better, to understand music even more… in all of this we learnt that ‘Everything and anything is possible with music.’”Mlondolozi Titi, Bloekombos Choir

“Fairy Queen has changed my life
in ways that I can’t even explain myself.”
Thobela Siyathula, Bloekombos Choir 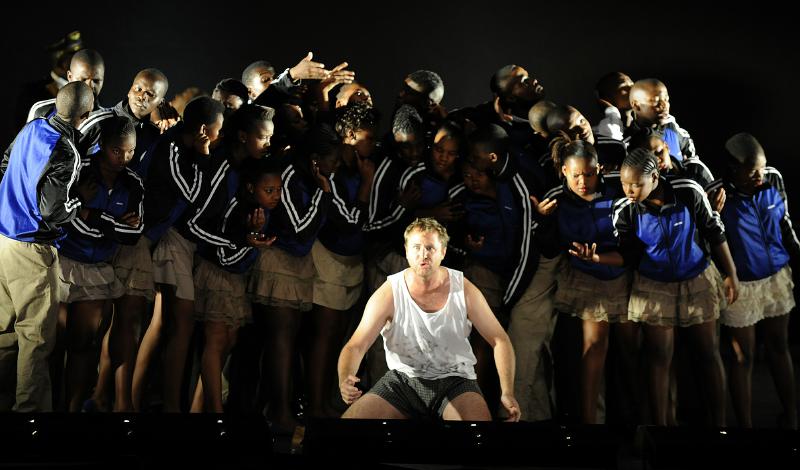 In tune with its visions of opera as an ideal vehicle for social development, Umculo offered workshops to interested schools and choirs in the lead-up to the performances. Through methods of scenic interpretation devised in Berlin and developed in South Africa, Umculo’s education team offered participants a unique chance to develop self-awareness and social consciousness through creative participation in half-day workshops around “The Fairy Queen”. Catherine Milliken, who directed the education programme of the Berlin Philharmonic from 2005 to 2012, joined Umculo’s education team in Cape Town.

In April 2013, Umculo hosted workshops in baroque vocal technique by South African tenor, teacher and opera director Kobie van Rensburg for 23 young students and postgraduates from throughout South Africa, in partnership with the University of Cape Town’s College of Music. The workshops, judged by participants and the university as a huge success, pave the way for future collaborations.